People are always asking me about which blogs I read, particularly decorating blogs. If you enjoy entertaining your decorating daydreams too, check out THIS POST I've written over at San Diego Momfia to see my top 5 fave decorating blogs!

Posted by Nacho Mama at 3:33 PM No comments:

The lovely Christine of Everyday Mama issued a challenge to the rest of us: share 25 things your readers don't know about you. So, without a great deal of preamble, here goes!

1. I graduated from my Catholic high school wearing a black Hefty garbage bag. It was an outdoor graduation and we had a flash floods, torrential rain and no backup plan.

2. I know all the words to Marty Robbins' "El Paso". I feel this is such a remarkable achievement that I have listed it on my resume.
3. "El Paso" is not my favorite Marty Robbins song. It's "Devil Woman".

4. I skipped 2nd grade. As far as I can tell this has had no great effect on my life today, except that I never learned to write in cursive and graduated high school at 16.

5. I can recite the alphabet, backwards, in under 10 seconds. And yes, you can totally call me on that.

6. The celebrity I'm most often told I look like? Linda Ronstadt. Been hearing that one since I was in kindergarten.

7. I only like Heinz ketchup. Get outta here with your Del Monte.

8. I met my husband in the drama department of our local community college.

9. EVERY program on the new Oprah Winfrey Network makes me cry. What is she trying to prove?

10. When I was 18, my mom and sister dragged me to some charity event and I complained the entire time-until I won a trip to Disney World in the raffle.

11. Speaking of raffles, I am a total raffle whore.

12. I ADORE Las Vegas. The tackier, the better. If the casino doesn't have ashtrays in the toilet stalls, why bother?

13. I am completely incapable of driving a stick shift without crying.

16. When I was 10, I got caught in a riptide and had to be rescued by a lifeguard. Muy Baywatch!

17. My dream car is the Volkswagen Karmann Ghia. Which I will never own, because I will never be able to drive it. (see #13)

18. I had a rather traumatic birth after which half of my face was paralyzed for quite some time. There's no visible evidence of it now, but I don't see or hear as well on that side.

19. Despite growing up in San Diego, I've never been to the horseraces at Del Mar-even though it's something I've always wanted to do.

20. I also know all the words to the Dead Milkmen's "Punk Rock Girl". That one? Is not on my resume.


21. I feel about Target the way that Holly Golightly feels about Tiffany's.

22. When I lived in the NYC area, I once went to the top of the World Trade Center and loved it, even though I am terrified of heights.

24.  Even though I love the beach and swimming in the ocean, I've never been surfing.

25. I got my very first Barbie for my 17th birthday from my friend Robert. She was awesome. My mom didn't believe Barbies were healthy for little girls to play with-until she had a granddaughter.
OK, how about just one thing we don't know about you?

PS-that was so much harder than I thought it would be!

I had a great day today! I got a lot of work done, a blog post submitted to SDMomfia, and had lunch with a dear offline friend. We even had sushi, which I love. Then? I had a great afternoon with my husband and kids. It was a beautiful, cool, late summer day here in San Diego.

I have certain songs that I reserve for days like this. Today, because I got soooo much done? I felt like...

I also love this song because Wonder Woman was one of the few primetime shows my dad would let me watch as a kid-he had a GIGANTE crush on Lynda Carter.

Do you have a "Good Day" soundtrack? What's on it? I'm always looking for new tunes to add to my playlist :)

*Actually, the BEST version of this theme song is from the show's first season, it's just that Youtube wouldn't let me embed the video here. But if you search "Wonder Woman Season 1 Intro" on Youtube you'll hear the AWESOMEST version of this already awesome song.

GIVEAWAY-It's the Ross "Back to School" CHALLENGE!

Like many of you who attended Blogher, I'm still recovering! It's taken a little longer than expected since I seem to have picked up a rather nasty bug from one of the 3,500 or so ladies I spent the weekend with. I hate being sick! It really gets me down. So I decided to cheer myself up by doing a little GIVEAWAY!

Before Blogher, I was contacted by the good folks at Ross Dress for Less to do a follow up post to the "Dress for Less" challenge we did a couple of months ago. THIS time, it's all about "Back to School". How much "Back to School" swag can I score at Ross for $25? A LOT!

Since I generously gave my "Blogher Bug" to my daughter, I figured she needed some cheering up too. So I found some seriously peppy school supplies that will keep her smiling well into the fall. WARNING: the following photo contains quantities of pink that may be unsuitable for cynical readers. 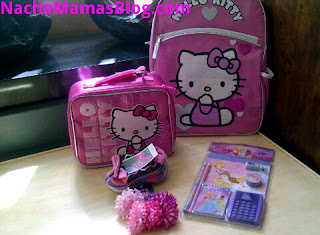 NOT BAD, right? Think you can do better? Then BRING IT. That's right, I'm challenging one of you to take the Ross "Back to School" Challenge! One of you will win a $25 Ross gift card to help your kid(s) look forward to Fall.

PS-Those heels I wore while dancing in the Blogher flashmob? Got 'em at Ross.


Disclosure: The items mentioned in this post and the gift card for the giveaway were gifted by Ross Dress for Less. The opinions expressed here are strictly my own, folks.

Well, it's the day after Blogher and I am BEAT!! The food, the drink, the friends-it was all a GIGANTE BLAST! (plus? I got soooo many questions about my cute Jockey Person to Person clothes!)

I'm way too pooped to do a real post about it right now, but I wanted to share one of the highlights of the whole conference for me: I DANCED IN A FLASHMOB! It was put together by sistah Momfia-members Theresa (@rockonmommies) and Mary (@mamamaryshow) and somehow 175 gabby bloggers managed to keep #OPERATIONGLORY a secret for weeks!

While I recover from last nights closing festivities-please enjoy this video taken by one of the 3,000+ bloggers who were there (I'm in the font row, middle left of the screen, in my black and hot pink Jockey Person to Person, of course!)
Thanks again to my wonderful sponsors, Jockey Person to Person-please like their facebook page! I'll be doing a post on the 12 outfits I wore at Blogher (put together from only 10 garments!) a little later.


Wishing you love and RHYTHM with extra cheese-
Nacho Mama


*disclosure: I was sponsored to attend Blogher 2011 by Jockey Person to Person, for whom I am a Comfort Consultant. The opinions expressed above are mine and mine alone.
Posted by Nacho Mama at 3:08 PM 2 comments:

This morning I woke up and saw that my friends and sistah bloggers were on Facebook talking about me. And it was ALL GOOD! Seems I'm the FEATURED BLOGGER at Latina Mom Bloggers. Thanks ladies!! I'm truly honored.
I was especially touched that they would post their interview with me right before Blogher, where I'll get to meet so many of my favorite bloggers, many of whom are (you guessed it) Latina Mom Bloggers. You can read it all HERE. And if you are a Latina Mom Blogger, or know one, I hope you'll check out the rest of the site and sign up!

I can't WAIT for Blogher! Now, off to light a vela so that it will cool off a little here in San Diego by then, lol!