So many Fitbloggin posts to write! But first...A GHOST PHOTO?

As I write this I am tanned, tired, sore (both from all the workouts AND the long drive and flight) and I have SO. MANY. POSTS. to share with you! 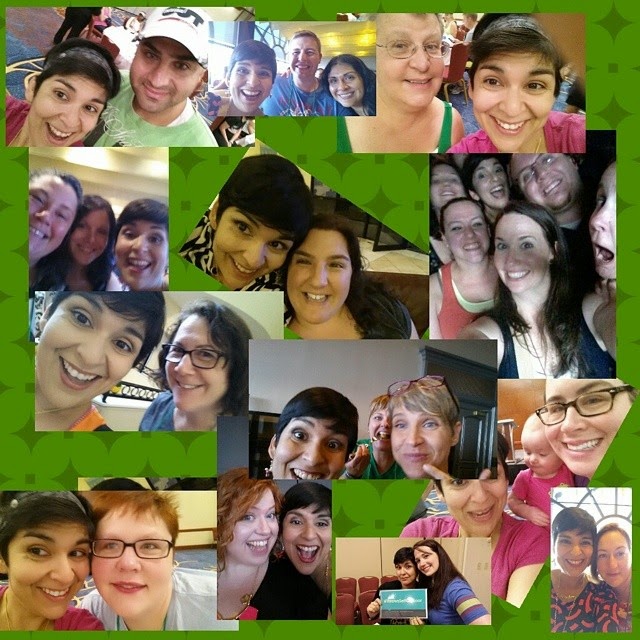 Fitbloggin was, of course, sensational. And Savannah is absolutely beautiful. I had lots of time to explore the city on foot and I took LOADS of photos and video that I'll share both here and on the new design blog (coming soon!).

Those of you who listen to the podcast know that one of the things I was most looking forward to was the GHOST TOUR we took on Thursday night (I'll write more about that later). I didn't see any ghosts that night (?). When I was exploring Savannah on Saturday afternoon, though, I found myself right in front of 432 Abercorn St., largely regarded as the most haunted house in Savannah.

NOW LET ME SAY, even though I totally believe in ghosties, when I walked all around this abandoned home I felt...nothing. Absolutely nothing. In fact, I felt pretty peaceful and happy, there was a lovely breeze and the house had some really beautiful architectural details. As I walked around the site, I noticed that I could see the sunlight streaming through the pretty stained glass above the front door through a window on the side of the foyer. I snapped a lot of photos, trying to get a clear picture of the design. I even posted one on instagram saying, "View of stained glass over entry door to 432 Abercorn. No ghosties, though. Least as far as I can tell."

When I came home and reviewed my photos? I THINK I CAUGHT A GHOSTY! Did I? Judge for yourself. The following photos were NOT edited, cropped, filtered or enhanced in ANY WAY. I've simply put the raw images side by side. 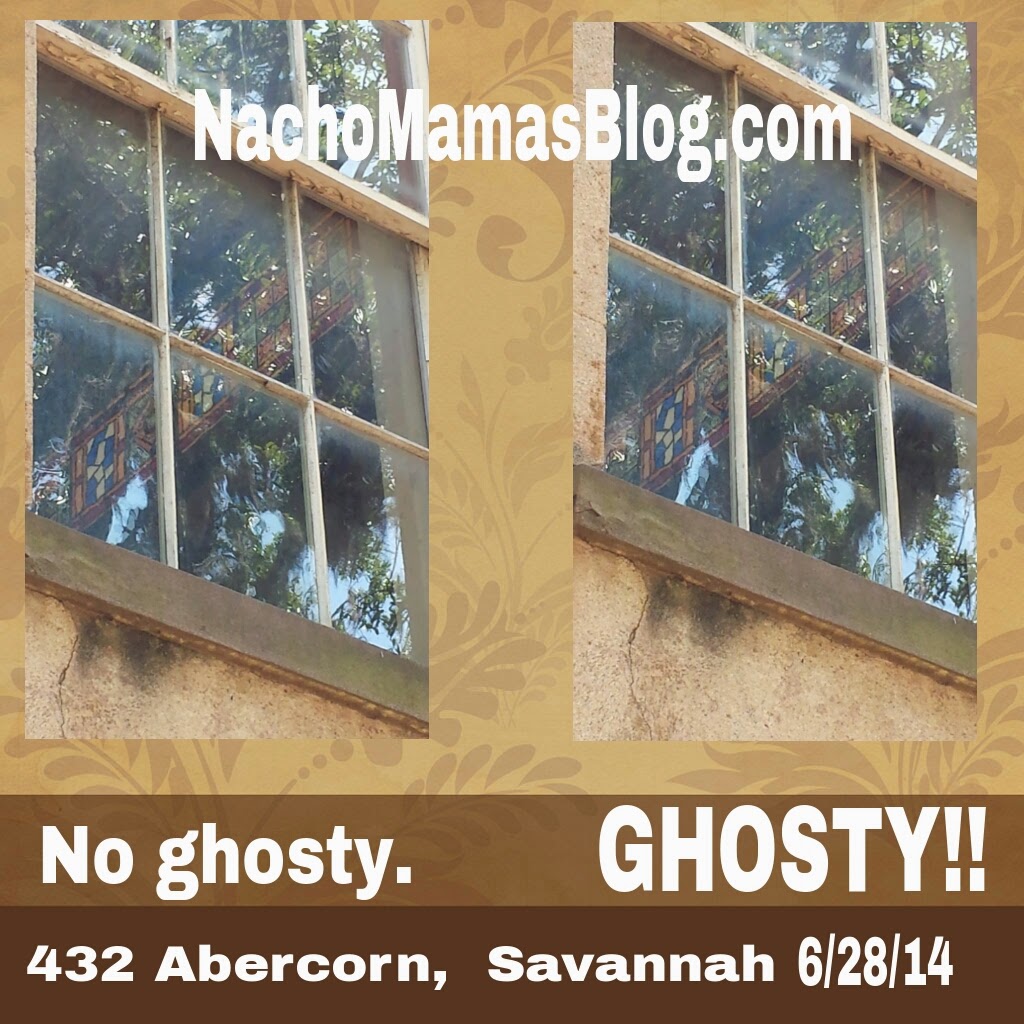 So what do you think? Here's the "Ghosty" pic with JUST an HD filter added. 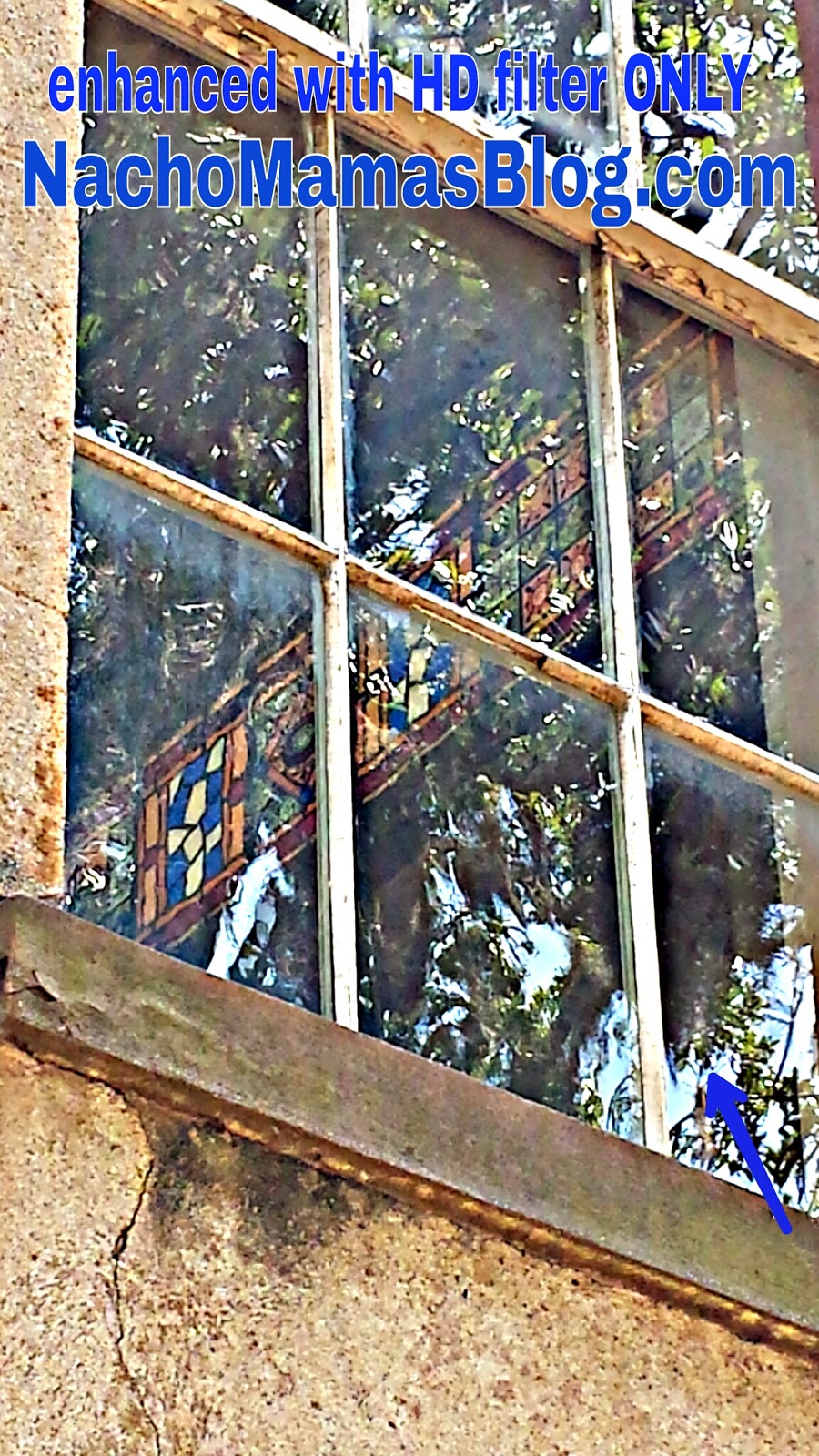 For the record, I showed this to my family and NO ONE could see what I think is a girl looking down through the lower right pane in the window. "You know, the brain automatically looks for human faces in stuff," says my husband, "I'm sure it's just the combination of the angle and your over-active imagination."

I'm willing to accept his theory. But COME ON, THOUGH! Here's the raw image one more time, zoomed in on the "ghosty". 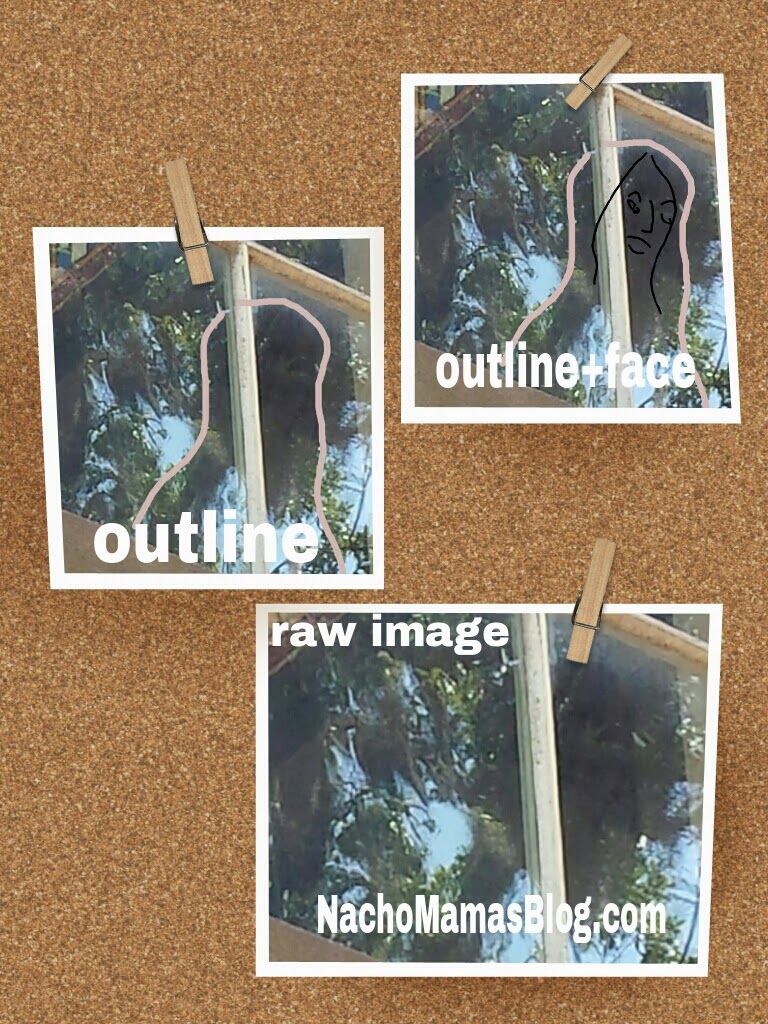 What do YOU think? Did I catch a ghosty girl? If I did, I choose to believe it's a friendly ghost, since I never felt "spooked" in any way while I was there.

Stay tuned for more stuff (that I actually have proof of) from my trip to Savannah for FITBLOGGIN!

Wishing you love with extra cheese-
Nacho Mama
Posted by Nacho Mama at 9:35 AM 3 comments:

I'm on the Lifestyle Accountability Show!

Well everything is in full Pre-Fitbloggin swing around here. I'm all packed and ready for my (gulp) 6:45am flight to Georgia tomorrow. Woke up this morning to a very special treat that I wanted to share with you all before I go-I'm the featured guest on today's edition of the Lifestyle Accountability Show!

I had such great time talking with Adam and Devon, and I can't WAIT to attend Adam's podcasting session at Fitbloggin! Hope you enjoy the show, you can listen on iTunes, Stitcher or HERE. THANK YOU Adam and Devon for inviting me on your FABULOUS show!

Wishing you love with extra cheese-
Nacho Mama
Posted by Nacho Mama at 10:13 AM 2 comments:

PODCAST EP#58: FITBLOGGIN-Why you wanna go and what to expect

Listen To Health Internet Radio Stations with NachoMamasPodcast on BlogTalkRadio
CLICK THE PLAYER TO LISTEN NOW!

It's time for FITBLOGGIN! The premier conference for ANYONE interested in wellness,weightloss,fitness,food, social media & health starts this Thursday 6/26. WHY do you want to go? What can you expect? That's I'm talking about today. I will also be a guest on the Lifestyle Accountability Show this week!

Disclosure: All opinions, content, views and ideas expressed on Nacho Mama's Podcast are strictly my own and those of my guests and are presented for entertainment and informational purposes only. It is strongly advised that you consult professional guidance when considering anything discussed on Nacho Mama's Blog or Nacho Mama's Podcast. I am also not affiliated with Weight Watchers-just a regular, paying customer, folks. ALL PODCAST CONTENT Blogtalkradio.com/NachoMamasPodcast is © Nacho Mama and nachomamasblog.com, 2009-2014. Unauthorized use and/or duplication of podcast content without express and written permission from this blog’s author and/or owner is strictly prohibited.
Posted by Nacho Mama at 1:44 PM 4 comments:

Wishing you love with extra cheese-