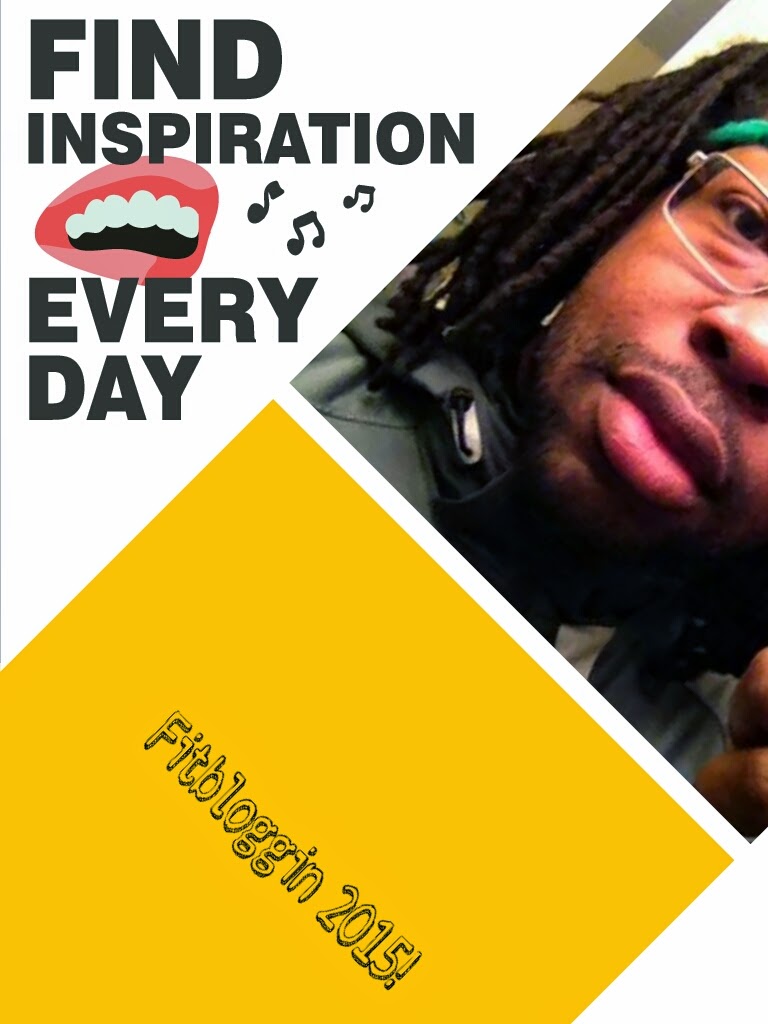 Are you going to FITBLOGGIN?

I hope you'll be able to join us in Denver this year. The Fitbloggin community is something that has definitely made a measurable difference in my life, not only professionally, but personally as well.

Wishing you love with extra cheese-
Nacho Mama
Posted by Nacho Mama at 6:26 PM No comments: 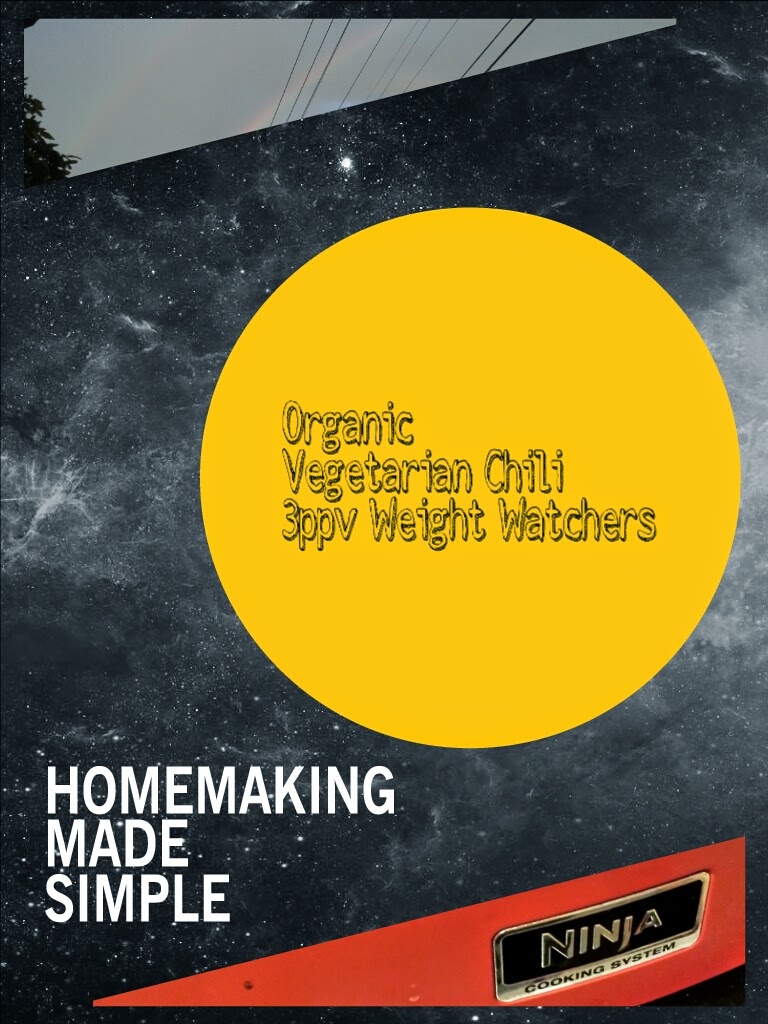 Do you have company coming over to watch the Oscars? This is the first time in years that I've actually seen some of the nominated films. This year I saw Gone Girl (hear our Book VS Movie podcast on it HERE), The Grand Budapest Hotel (loved!) and The Imitation Game (also loved, #Cumberbitch). Go me!

If you have friends coming over and want to whip up a simple crowdpleaser, try this chili! You can throw it in the slowcooker on high for 1-2 hours, or low for 4-6 hours or just heat it up on the stovetop. It came out YUMMY. I've had so many requests for cooking videos! This was surprisingly easy, so I'll definitely be doing more-even though I woke up my son. Maybe next time I'll even change out of my pajamas!

In case you missed it, here's the review of the Ninja 4-in-1 Cooker I did back in December. I still haven't taken it off my counter.

If you need something to listen to while cooking, check out our latest Book VS Movie. We discuss High Fidelity. Because John Cusack, Jack Black, Lisa Bonet!

Quick what are your Top 5 favorite movies of all time?

This content is not affiliated with any company whatsoever, just sharing what I love with you!
Posted by Nacho Mama at 2:06 PM 2 comments: 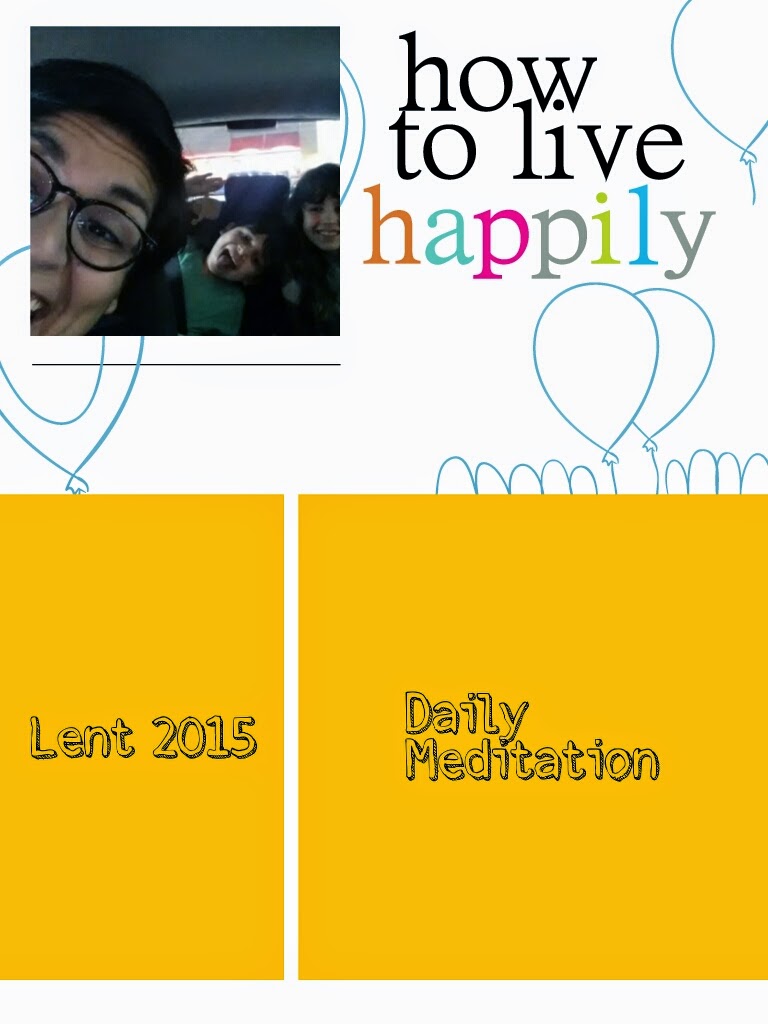 This year, I'm going to try to meditate every day for 40 days. Even if it's just a couple of minutes, I don't want to miss a day. Wish me luck!

Check out Book VS Movie on Facebook or online at BookVersusMovie.com. Margo and I have a great time talking about books and movies, we hope you enjoy joining us!

Have a wonderful weekend, everyone!

Wishing you love with extra cheese-
Nacho Mama
Posted by Nacho Mama at 6:47 PM No comments: 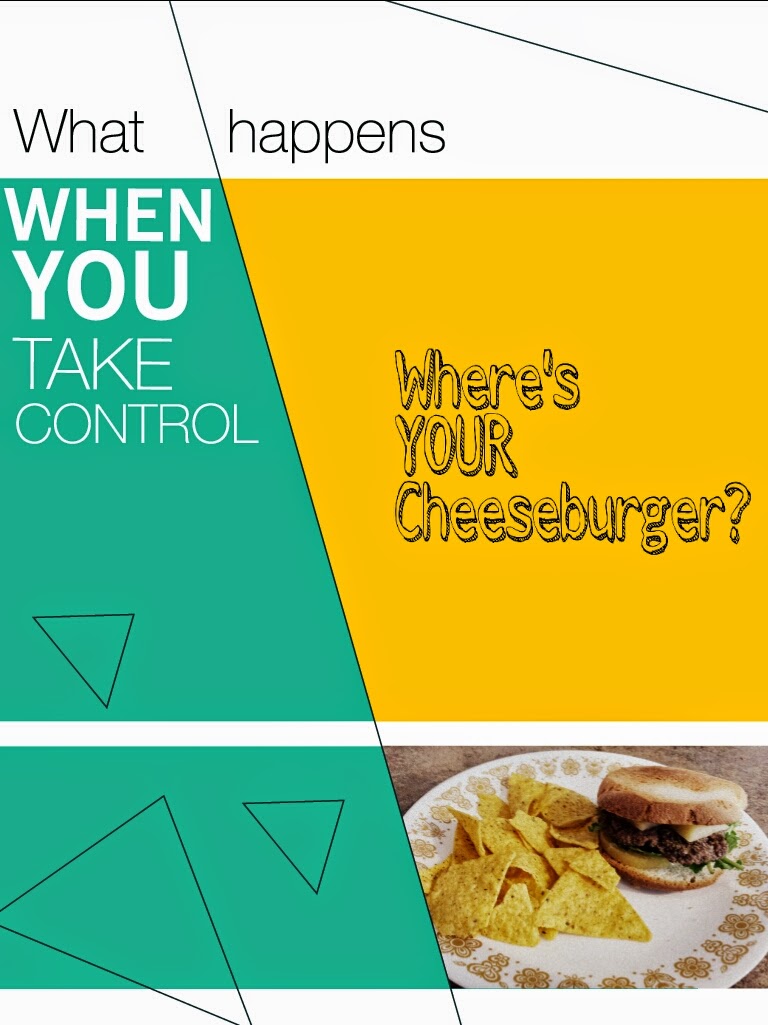 Had a "forehead slap" moment this afternoon and thought I'd share.

That burger was FANTASTIC. And I didn't have to spend any money!

Doesn't always seem like the things we most desire are things we actually already have?

If you are viewing this anywhere but on NachoMamasBlog.com, then you are reading stolen content. Click away!

Posted by Nacho Mama at 8:18 PM No comments:

Everything's still great, but it's been a hard day.

Warning-this might be a bit of a bummer, I'll try to salvage it by the end, but I can't make any promises.

Let me start by saying that everything is still great, but February 8th is always a hard day for me. It's the day my dad died. Usually I manage to pretend February 8th isn't happening; maybe I might be a little more irritable than usual, but I get through it. This year I couldn't run from February 8th. Today it's officially been 10 years since my dad died from prostate cancer at the absurdly young age of 57.

This is me (obviously) with my dad and my daughter on the steps of the tiny house Dad was born in, in the Colonia barrio of Oxnard, Ca. He was the baby of the family and, as a toddler, would sit under the shade of an overturned orange crate while his parents worked in the farm fields that still surround Oxnard. The farm workers were constantly sprayed with harmful chemicals meant to protect the crops. When this photo was taken, Dad had already outlived the doctors' prognosis by 18 months. I remember walking along what had been his street and hearing how virtually every family that lived there during his youth had been touched by cancer.

I miss him so much and am still surprised at how angry I am to have lost him. Every now and then my son, who is five and looks exactly like my dad, will do something so adorable and I'll think, "Wait til Dad sees this!" Then I remember he's gone and never got a chance to meet either of his grandsons.
I have no regrets about leaving anything unsaid, we were very close. I also know that Todd and I both did everything we could possibly do to help my dad and my mom. When I think back on those awful last days and the 2 years of hell that followed his death, I'm still not sure how we did it.

I do have some regret when I think about the whole experience, though. I was so much younger and so naive about health in general in those days. Also, we simply did not have the access to information that we have today. If I knew then what I know now about wellness and nutrition, I could have done so much more for Dad. Maybe he wouldn't have lived any longer, but he might have enjoyed that time so much more than he got to. He might not have suffered as much as he had.

And if I had had access to blogging and the wonderful network of friends that I've made through social media? It would have been so much easier to bear.

I know I really can't allow myself to go down that road and I know we did more than our best. All I can do now is my very best to keep my own kids from ever having the same experience. Then maybe try and help others and their kids, too.

So now that it's been 10 years, naturally I'm re-evaluating everything. Trying to work out how I might do the most good with what I know and what I've experienced. It's going to a take a while to figure out, I think.

I started pondering it this morning as I went on a walk to Balboa Park. When I was a kid my dad used to take me there on the days he was "in charge" of me. We'd get sandwiches from the deli across the street and eat them in the park. After lunch, he'd chase me around the lawn and push me on the swings.

Balboa Park was beautiful this morning. 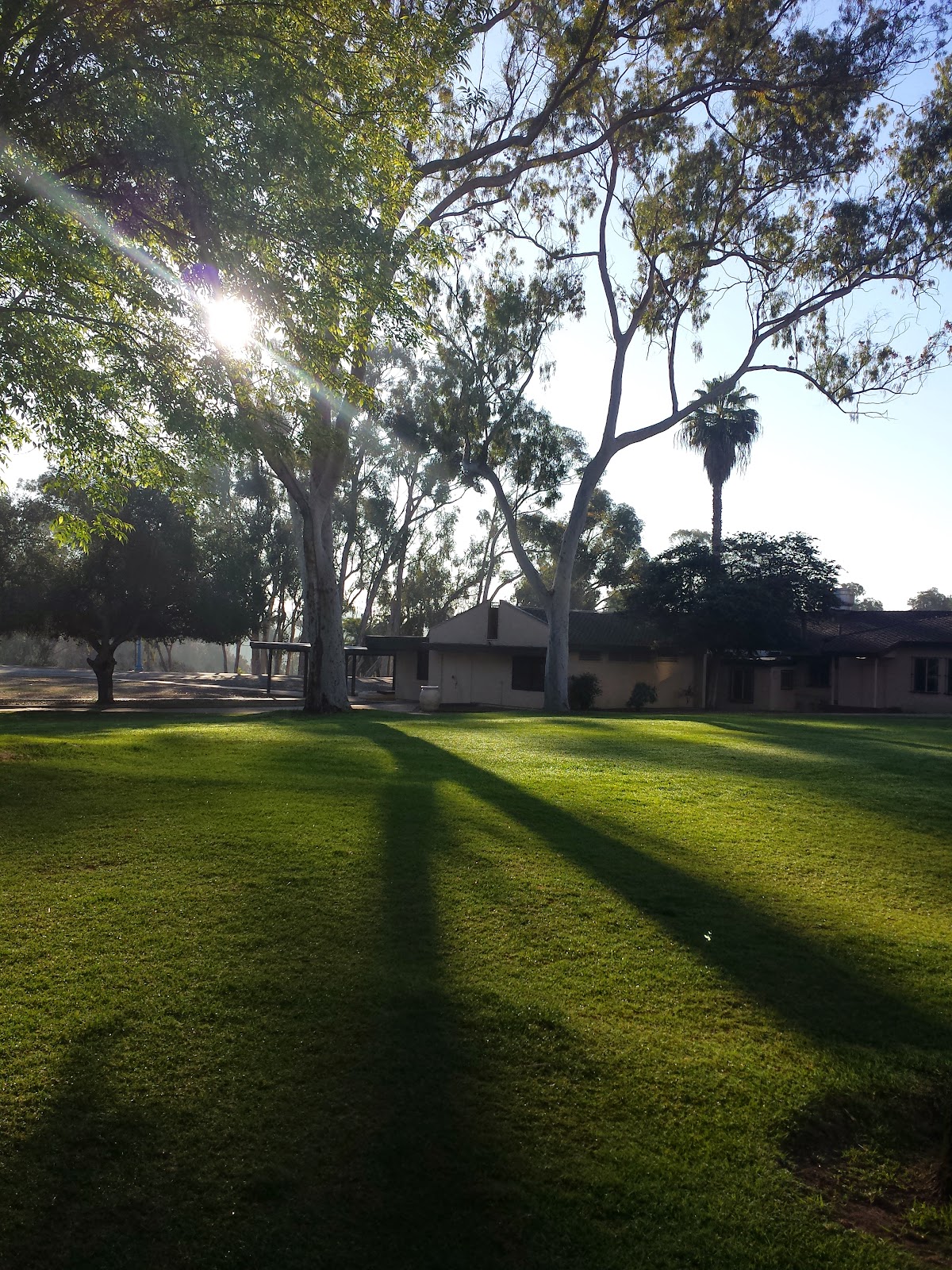 I could really feel like my dad was with me as I walked alongside the towering eucalyptus trees. I silently asked my dad to prove he was there by showing me a flowering cactus. I don't know what made me pick that. There are TONS of cacti, all varieties, around here, but they don't usually bloom til mid-April. I saw scores of unadorned cactus on my walk.

When I got to the playground I swung on the swingset for a while til I became frightened of how high I was swinging.  I jumped off the swing, sticking a perfect Marylou Retton landing, and suddenly realized that I would never have fit in that swing a few years ago, much less have been able to leap from it.

That cheered me up.

I gave up on my cactus hunt and decided to walk home via 5th Avenue, which is mostly commercial with no gardens. Then I spotted this in the parking lot of a dentist's office. 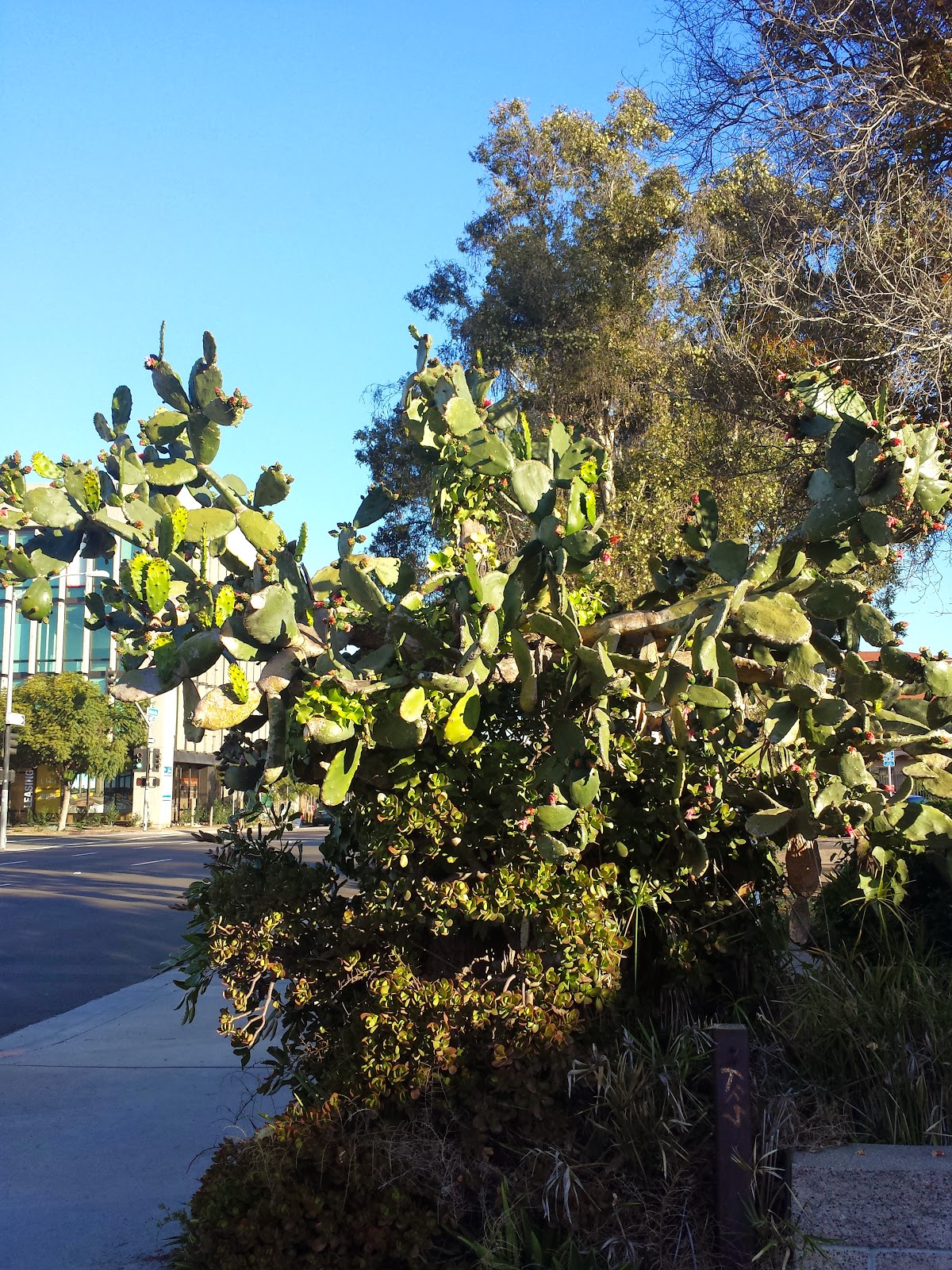 As I got closer I could see this. 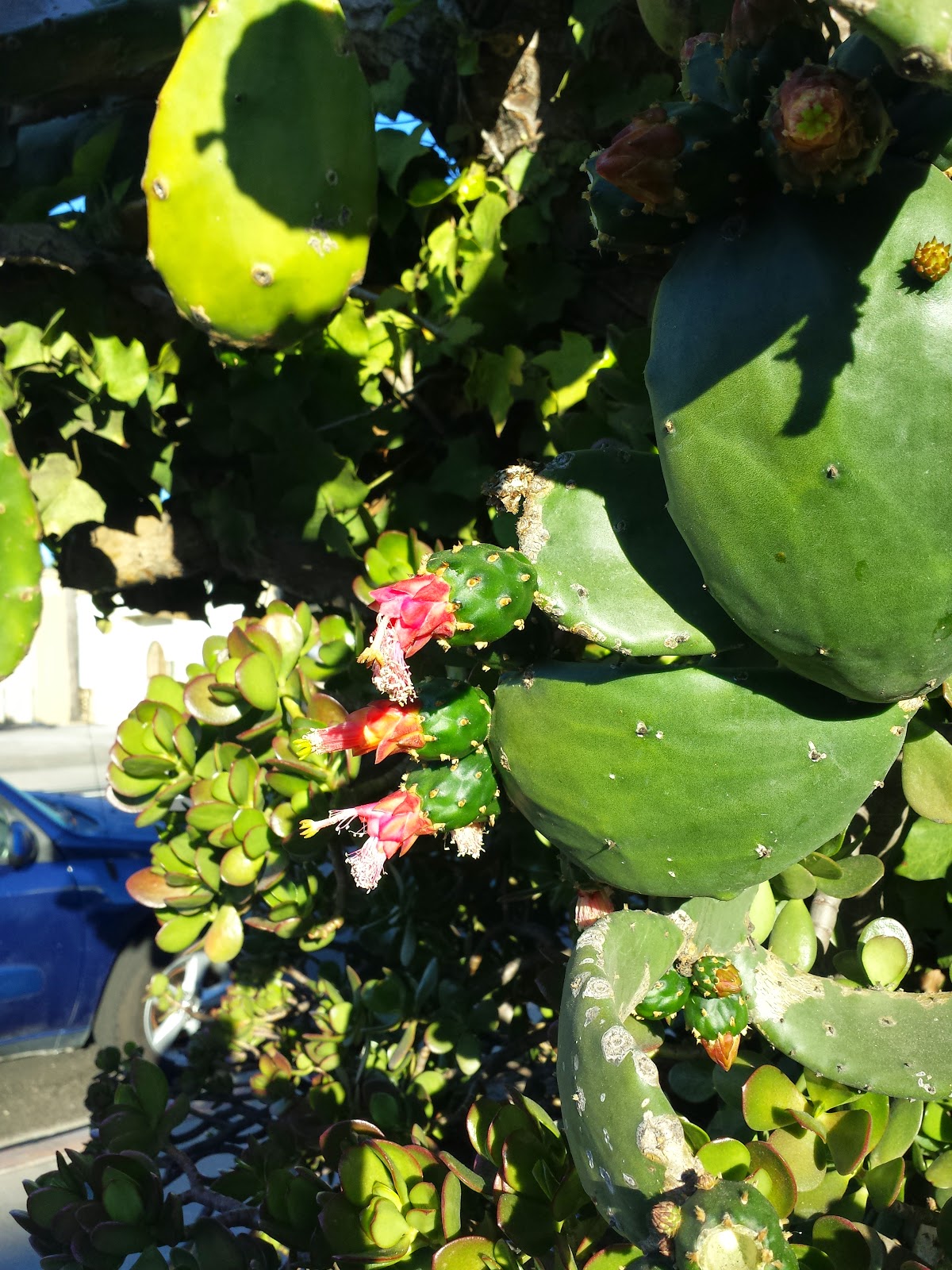 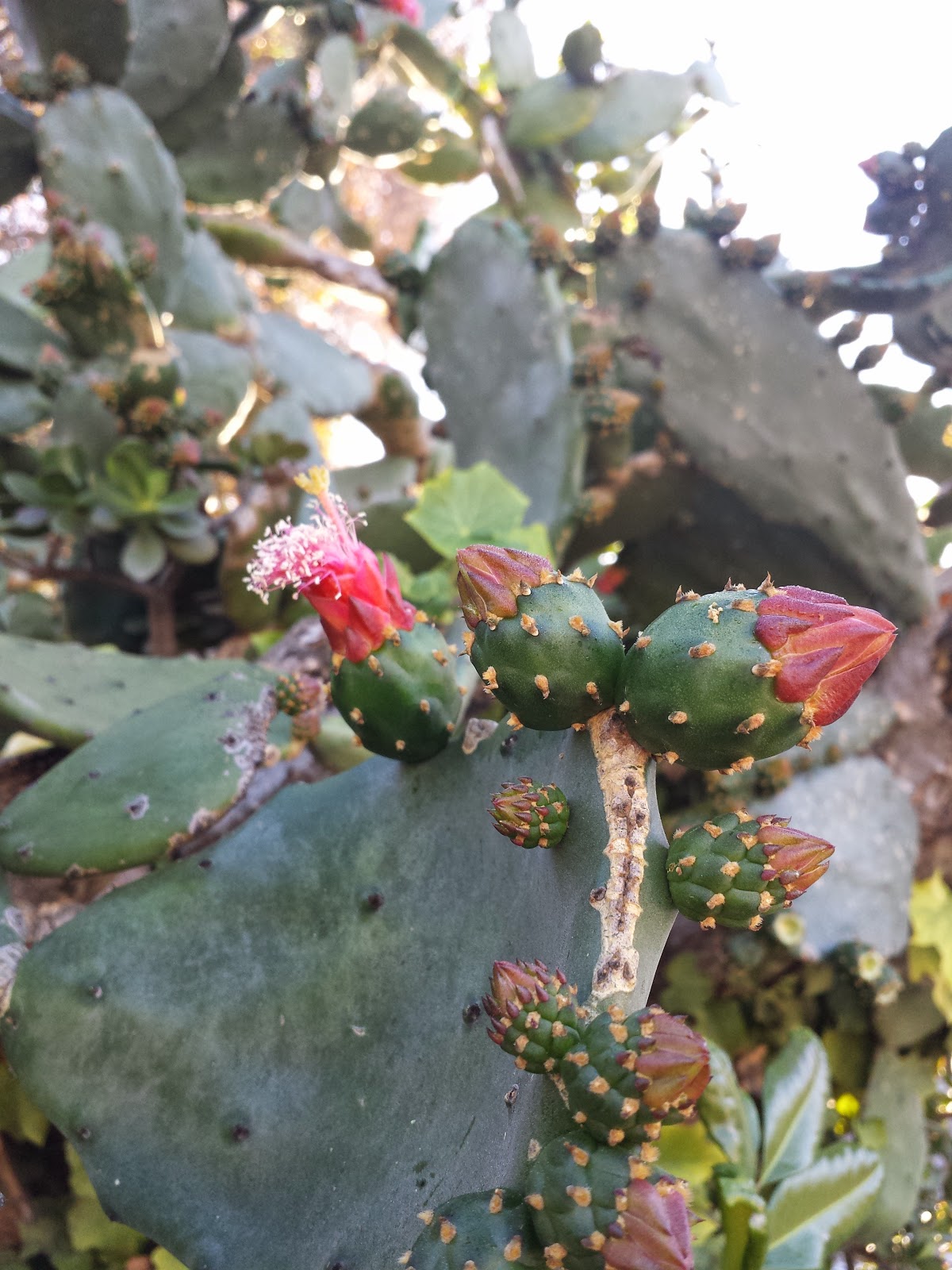 And yes, I stood there on 5th Avenue, right in front of the dentist's office, with tears and snot running down my face for about 5 minutes. Hell, it was before 8am on a Sunday and no one gets their teeth worked on then. I wouldn't have lost it so if it hadn't been for the fact that this particular cactus is a nopal. My dad's parents always grew nopales in their backyard. My grandfather would can them and my grandmother would cook with them.  All that plus the fact that I love to eat them, means nopales are very special to me.

I'm not sure what it means, but I'm sure it means something. Whatever it means, I'm grateful.

(If you're reading this anywhere but on NachoMamasBlog.com, then this content has been STOLEN. What kind of a jerk would steal a personal post like this?)

Wishing you ALL love with extra cheese,
Nacho Mama
Posted by Nacho Mama at 7:38 PM 9 comments:

I don't know what it is, but I seem to be having one of those weeks. I'm fine, my family is fine, but so many people I know are so not fine. This week it seems like everyone I encounter is going through tough times. Of course I feel very honored to be there for them but last night I just needed to laugh. At something. Anything.

I have several tried and true clips that always (really always) make me laugh. Plus I found a few more. It made it much easier to head out the door this morning, believe me.

So just in case you're having one of those weeks, or everyone around you is, here's some videos that helped me out last night. I've shared some of them before, but they bear re-posting.

1. Because this pretty much sums up how I feel about most "home improvement" shows:

2. Because I love buying things off the TV:

3. Because I sometimes forget that happiness is a choice:

4. Because, when all else fails, I know I can always break the Rupaul's Drag Race glass (warning: NSFW):

Posted by Nacho Mama at 8:30 PM No comments: